If You Didn’t Earn It, You Don’t Deserve It. Questions? 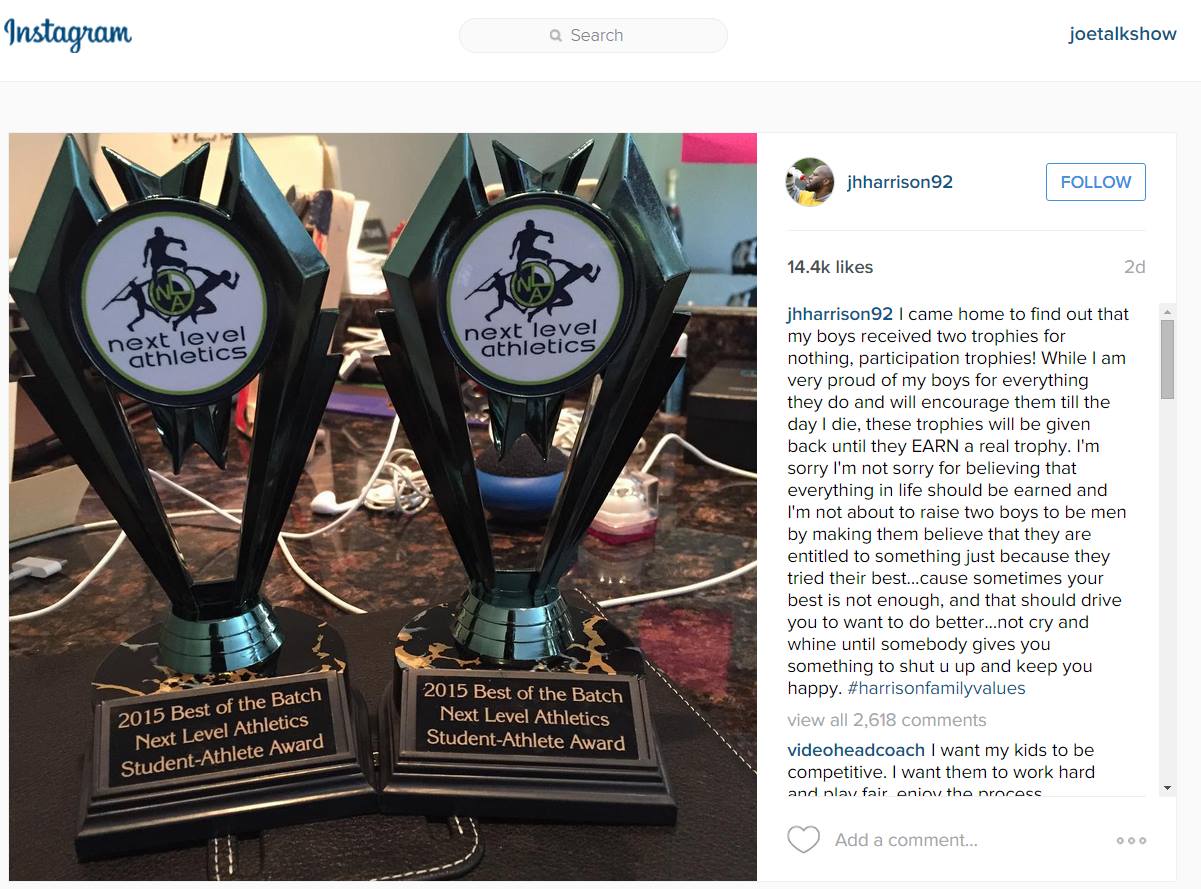 There’s been a bit of controversy lately over what Pittsburgh Steeler James Harrison posted on his Instagram account.  If you didn’t see it or hear about, you can click on the picture above.  To paraphrase, the football player and father was very unhappy his sons received “participation trophies.”  He took them away and told them they could get them back if they earned them.  I could NOT agree with him more. Some time ago, I was working as the News Director and Main Anchor at the ABC affiliate in Lansing, Michigan.  My father come up from Florida to visit and came to work with me one day.  My father was not the kind of man who ever gave compliments out.  When I introduced him to my General Manager, my GM said, “We love Joe.  He does a great job for us.”  My father’s response made me think.  He didn’t kiss my ass.  He wasn’t flowery about how he felt about me.  He didn’t brag on me or take credit.  He simply said, “You know, he’s always tried his hardest no matter what he was doing.” At first I thought that was lame.  But, I thought about it and realized — that’s a huge compliment… especially from a guy who never gave them out.  He got that I learned work ethic from him and my mother.  He understood that if I decided to do it, I’d do it all out.  Once I got it, I was happy he understood I’d do whatever it took to be successful.  And, frankly, that drive inside is why I’ve realized many of my dreams.  It wasn’t easy — it was hard.  It wasn’t a smooth road — it was bumpy.  It wan’t on a silver platter — it was on a dirty plastic dish.  But, in the end, the hard work paid off. I learned that lesson from my parents, grandparents, idols (broadcasting, sports, musical et al) and teachers.  I learned at a very early age that the world was available to me if I only put my head down and forged ahead.  It hasn’t been all roses either.  My drive has sometimes rubbed people the wrong way.  They didn’t get it.  So, I adjusted.  Started all over.  Took a different route and made my hay another way. This will sound simplistic, but I can point to my experiences as a 9 year old kid playing organized baseball for the first time.  I couldn’t hit, couldn’t field, couldn’t throw straight so I rode the bench.  You can’t do that today.  EVERYONE plays EVERY game.  No balls, no strikes, no outs — EVERYONE’S a star.  I was not.  So, I would go to practice early and leave late.  I’d bother my father to have a catch with me (yes, most of you say “play catch.”  My dad and I HAD a catch).  I’d field balls until my face and shins were bruised.  I threw a tennis ball against the garage door until my father called me a nasty name because of the noise it made.  And suddenly, I was a pretty good player.  The other kids who rode the bench still rode the bench.  I was the starting catcher.  Nobody handed me that position.  My parents didn’t demand I play because I was entitled or because they paid the sign up fee.  I was given the opportunity because I worked for it… hard. My first year, we ended in last place.  I think we got a certificate.  The first place team left with beautiful trophies.  The second year, I received most-improved — because I was.   The third year, we won first place.  We left with the beautiful trophies because we put our heads together and decided to really sweat and exhaust ourselves getting better.  Had we received the same-sized trophy as the first place team that first year, we would NEVER have tried so hard to get better.  Therefore, we wouldn’t have gotten better.  Not even a little. The lessons learned have lasted a lifetime and have served my teammates and me very well.  I don’t care what anyone else says on this.  They can write op-eds until they’re blue in the face.  What James Harrison did was exemplary as a parent.  It wasn’t to prove a point.  It wasn’t to tell the league off.  It was to set his children up for success throughout their lives.  What he did is what every parent should do.  What he did is out duty as parents.  Show our children the road to success and point them in the right way.  Yes, you can get a trophy — if you go work your tail off and earn it.  Then it will actually mean something and you’ll remember that lesson for as long as you live.   jp