I write this with the full knowledge of the irony that I’ll be posting it on my social media sites. Social media — like it or not, it’s here to stay.  The creators of such websites as Facebook and Twitter will have us believe they did it to better the world or to offer voices, known and not-so-known, a vessel through which they could be heard.  Of course, in the movie “The Social Network,” it’s alleged Mark Zuckerberg started Facebook to pick up girls.  Today, he denies that and says he did it to make a better world.  Either way, they aren’t mutually exclusive.  I’m guessing one can consider finding hot chicks on campus a way to better one’s own world.  I digress. Billions of us use social media now and, we do it with a false assumption.  We assume that when we post something, those connected to us will see and be able to consume it.  It’s not a bad assumption if the purveyors of these sites were honest with us.  They aren’t.  The lie is simple, come to my site, post to a page we give you, invite your friends, family, co-workers, classmates and they’ll see what you post.  You’ll see what they post.  Good deal, right?  If that really were the formula, the site owner would still make huge profits off of advertising sales.  The more of us and our people who spend time on the site, the more eyeballs on the paid ads.  But, that’s not how it works.  In reality, it’s a bait-and-switch scheme. I’ve often thought that after some people hit huge financial success, their outlooks change.  Zuckerberg and others who started Facebook are billionaires.  So are the folks that started Twitter and Google.  Why not ride the wave and enjoy the benefits?  Because money becomes less of an objective.  And, I believe, a certain level of guilt kicks in.  The idea that they started these sites to offer you and me the ability to freely speak may be partially true.  The idea they started the sites to make money is certainly true.  But, now that the money is a given, those who run and own the sites need a new objective: control the message.  Test out my theory.  Post something anti-Trump and see how many likes/retweets/shares you get.  Then post something pro-Trump and compare.  Use the same hashtags and verbiage.  Just make sure one is pro the other anti.  Now some proof. Am I a conspiracy theorist or is there reality behind this notion?  Here’s what’s real: I have over 360,000 followers on Facebook.  I grew it from nothing to where it is today.  I did it through posting pictures, memes, videos, original content and a small amount of advertising early on.  Some days, I’d add 1000 followers or more.  Facebook wanted more original pictures, videos and status updates.  The more I posted, the more I pushed the page on my radio show, the better for us all.  I gained more influence, my followers got great content they might not get on the radio show, and Facebook got more eyeballs to see their advertisers messages meaning more money for them.  Then suddenly the growth stopped.  Word of “algorithms” came to the surface and how they changed to direct eyes where Facebook wanted them to go.  What the heck is an algorithm? Facebook — and Twitter does this too — decides what you do and don’t see in your timeline.  In essence, you subscribe to my page and you’re saying you want to see what I post.  Facebook has a different plan.  It somehow calculates what it sees as your interests through your clicks then directs more of that content your way whether you like the page or are positive in the content or not.  It’s my believe those running the site have taken it several steps further.  In fact, I’ve been receiving messages like this:

Could Facebook really be simply unliking people from my page without them knowing?  I decided to dig a little deeper with the tools Facebook itself offers on the site.  The idea behind offering these tools is if you’re not getting enough likes or your posts aren’t going viral like you would hope, you can buy your way to success.  I was stunned by what I’d found.  From the 1000+ likes per day I was getting to not much movement at all.  In fact, some days, the UNLIKES outnumbered the Likes.  Strange in deed.  I’ve found I’ve gained only a couple of thousand net likes in the last few months and the number of unlikes has grown exponentially. 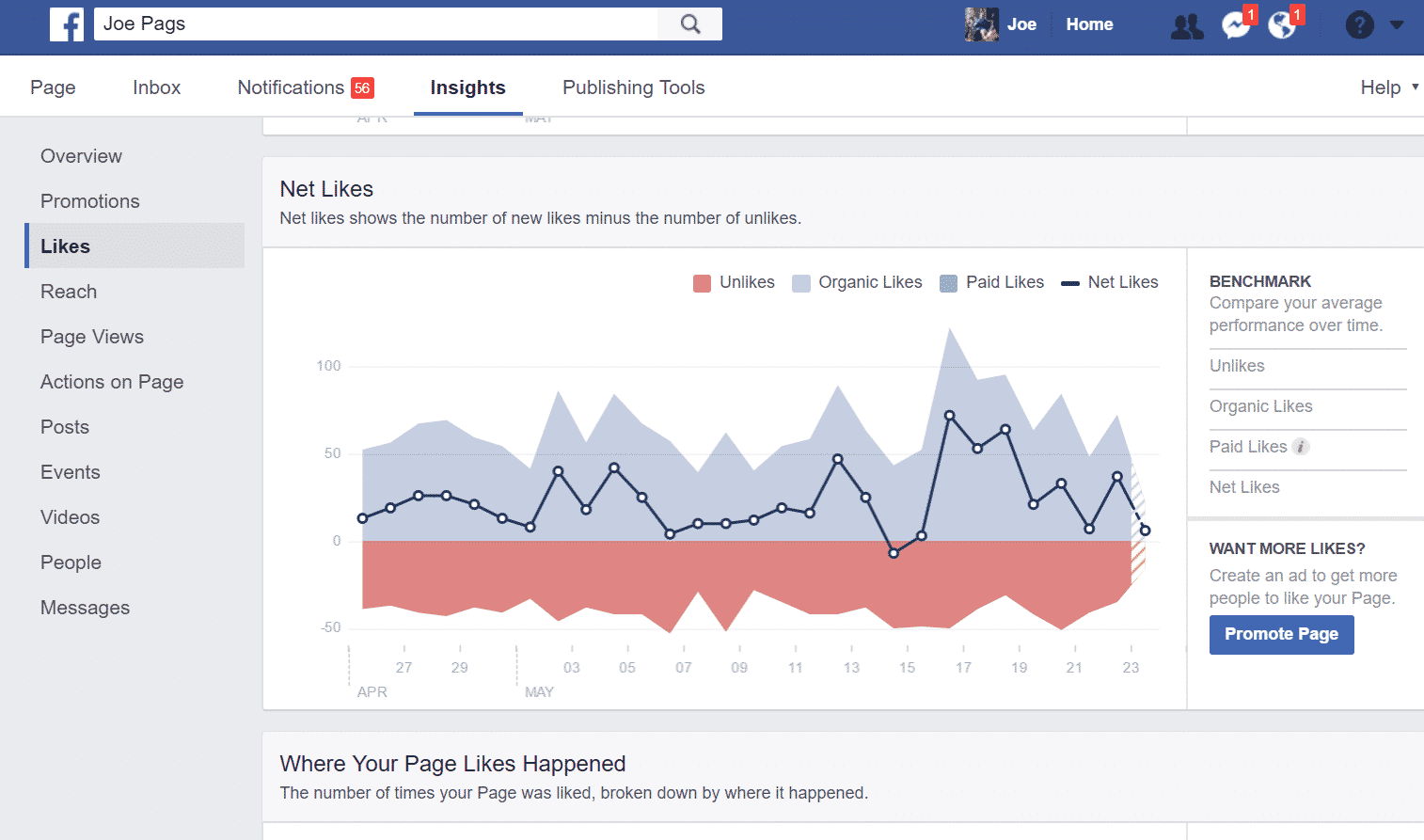 After doing some searches on the Internet, I’ve come to find terms “ghost-banning” and “shadowbanning.”  This is a mechanism by which social media networks can squelch the voices and reach of pages they see fit.  There’s not doubt that Zuckerberg and others at Facebook and the founders and higher-ups at Twitter are very liberal.  That doesn’t bother me provides they actually are offering accommodation to all voices on their sites to which the ask us to visit.  Yes, I can post.  Yes, you can see my content if you go directly to my page.  But, it’s clear that if you Like my page and look for my posts in your timeline or newsfeed, Facebook and Twitter are deciding what you do and don’t see.  This is why when a left-wing loon actor or musician or media personality posts something, it goes viral much more quickly and consistently than a post from the other side.  This is why when you put in #BlackLivesMatter on Twitter, there’s a symbol Twitter adds to the post out of respect but, if you put #BlueLivesMatter no such equivalent symbol appears.  This is why when President Trump does something most Americans would like, it hardly trends.  Conversely, when some leftist media outlet makes an unsubstantiated claim against him, it trends quickly and stays on the top of the list for longer.  How do you fix this? It’s a good question with a complicated answer.  We can’t force Facebook nor Twitter to be fair and stop with the ghost and shadowbanning.  They have control of their websites and they’ll continue to force people from following pages like mine and hiding my content from my followers.  If you like Facebook and Twitter — and I do like the idea of them — then go to the specific pages of those you follow to get their content.  In other words, if you go to facebook.com/joetalkshow or twitter.com/joetalkshow, you’ll see my posts.  If you wait for them in your timeline or newsfeed — you may never see them.  Also, be sure the pages you like and profiles you follow don’t change status.  Facebook and Twitter are unliking and unfollowing with you knowing at times.  Also, there are other options popping up. Yes, we have been overloaded with social media platforms and I get there could be some fatigue by keeping track of them all but, there are new options out there that say they truly offer what we thought the big guys were offering: a forum for people to truly and freely share ideas without the management deciding if they agree with them.  I’ve gained quite a following at www.minds.com/joepags and am slowly building at gab.ai/joepags.  I really like the user interface at Minds and Gab.ai is growing like crazy.  There’s clearly a need and desire for less control and more freedom and these are options certainly worthy of you checking out.   Pags
0