For the Second Day in a Row, the Left Attacks a Republican for Saying Something Obama Said Before 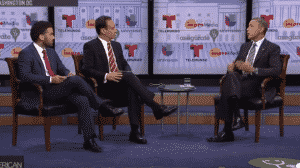 No, I’m not surprised at them — but, I am at those who are buying it.  Just this week, Dr. Ben Carson was speaking to a gathering of employees at his department, Housing and Urban Development.  He was talking about the job they have of helping all Americans realize the American Dream and opportunity.  He talked of immigrants coming through Ellis Island with a dream for their children and grandchildren. He added who he called the “immigrants who cam in the bottom of slave ships…”  He was excoriated for a full day.  Vile attacks.  Of course, there was no mention of the 2015 comments from then-President Obama when he said, “…those of African heritage who had not come here voluntarily and yet in their own way were immigrants themselves…”  It’s almost comical to see the difference in reaction by the same group of people — if it weren’t so disgusting. Fast-forward one day and Rep Jason Chaffetz found himself in the cross hairs.  His sin?  Suggesting people prioritize healthcare over expensive/unnecessary phone upgrades.  Let the attacks begin.  Yes, former President Obama went there too, and nary a word was said.  Here’s proof.
0